It was first mooted as ‘a bit of an idea’ over a coffee in the middle of last year.

By October proposals had been written and forms filled in, and then an email arrived. I still have it. It reads thus:  Dear Ros, Degna and Alison, we are delighted to tell you that your production has been selected to perform at Fringe Festival Praha 2010 …

Blood & Money was alive, scheduled to perform and we hadn’t even written it yet. Gulp.

I’ve kept the website up-to-date with some of the process that followed: extracts from early drafts performed at First In Three; deadlines; preview reading at The People’s Theatre and most recently a preview performance at Live Theatre.

A week after said preview performance we boarded a flight to Prague … well, some of us did. One of our cast had her flights moved about due to the BA strikes, leading to a delightful six-hour solo wait in Brussels Airport, while another followed on the next day. Anyway, I digress. We all made it there in the end.

With 38 shows performing in 7 venues across 9 days there is no time for slacking.

The day after we arrived, two of the company – Jill and Faye – performed a short scene from the play as part of Fringe Sunday. A laid back, good-humoured affair hosted by Fringe co-founders Carole Wears and Steve Gove, it’s an afternoon when companies perform extracts from their plays. The crowd were fantastic, up for a good time and supporting everyone all the way. Our piece went down well – it was a good start. And we were now officially international artistes!

Guide book in hand (in Roz’s hand I hasten to add, if I was put in charge of directions we wouldn’t have made it out of the Apartment building), Roz and I went round local cafes and bars leaving flyers and posters. Unlike at the Edinburgh Fringe, the people of Prague don’t get bombarded on the streets as flyering is illegal. On the one hand this is frustrating because you don’t get to chat to people and see where the flyers are going. On the other it’s fantastic, because I can testify from personal experience that there is nothing so soul destroying as trying to flyer a disinterested public, especially in the pouring rain.

While we spread the word in Old Town and New Town, director Degna led the cast in last minute rehearsals in the Apartment in Mala Strana. They pushed all the furniture out of the way and marked out the size of the stage on the floor. That’s one of the great things about Fringe, it’s pretty ad hoc, fly-by-the-seat-of-your-pants theatre! Our actors really rose to the challenges and did us proud.

The show opened on Tuesday 1 June at Divaldo Na Pradle-Kavarna. We had spent the morning convincing ourselves that no one was coming. I tried to drown myself in a glass of Pilsner, while gnawing off what was left of my nails. But amazingly, 3.30pm rolled around and there was an audience. They came. This must be what Kevin Costner meant when he said “if you build it they will come”. They will indeed Kevin, they will indeed. Phew.

And they kept coming. On the Thursday we played to a capacity crowd, which was fantastic, and topped off with a reviewer calling the show “a high point of this year’s Fringe”.

After four performances it was all over. All the work, all the stress, all the money, all the organisation, all the logistics – all folded up with our set and tidied away. It was both the longest and the shortest week of my life. Sitting here now I can’t believe it’s over – that we’ve been and done it and lived to tell the tale.

In hindsight, debuting Rascally Scoundrels at an international Festival was pretty ambitious – Roz, Degna and I did keep catching each other’s eye and laughing at the audacity and stupidity of it all. But, we did it. And any future projects will seem like a doddle in comparison!

Some of the highlights: Blood & Money (obv!); that chocolate pancake; Carol, Steve, Giles, Honza and the team; The Harbour; sunshine; visiting the British Embassy; Horse, the views; other people being able to read maps; Municipal House; making it through in one piece …

(Lowlights? A few. Wylliova Tours in the pouring rain; the shows we missed; the crushing disappointment of the Astronomical Clock; there not being enough hours in the day for another pancake) 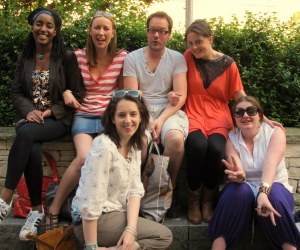 One thought on “Dobrý den …”