So then. Here we are. Firmly on the homeward stretch for Never Rains But It Pours. Blimey, how time flies. Rehearsals kicked off a couple of weeks ago – sadly I wasn’t able to make the first one due to a clash with the Tobacco double-bill at Northern Stage. However. Last week I rolled up at the People’s Theatre to sit in. 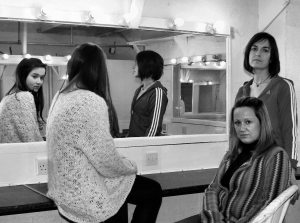 I’ve worked with Kath before on My Mam Was An Ice-Cream Blonde and with Louisa on Patricia Quinn Saved My Life (along with Kath, again, as it goes), and Jo took part in the first ever workshop for Rains back in Jan 2010 when it was still called Trickle and only 20 pages in length … small world! Emma is new to the People’s, but from what I’ve seen so far she’s a cracking young actress and I’m really excited she’s on board.

With a new play the early rehearsals are the most crucial for the writer, I think. It’s the first time you’re seeing the shape of it and hearing the words up on their feet with the actors who are going to be performing it. Read-throughs are great but will only get you so far, actual rehearsals are a priceless opportunity to make those final changes, cuts and additions. That said, me and my editing pencil have not had too frantic a time of it – a few line changes here and there, a couple of added lines of dialogue for clarity. The biggest jiggery-pokery to date has been re-writing a whole page, but only because when hearing it I realised what I already had threw up an interesting question that could be explored a little further.

The rehearsal time for this project is very limited. As the People’s is non-professional, rehearsals are in the evenings, 3x a week from 7.30pm til 10pm at the latest, for 6 weeks. But there are 4 plays to rehearse for Past Glories, and it’s been allotted the same 6 week rehearsal period. So. Two plays rehearse per night, meaning each get half the normal rehearsal time – approximately 23 hours, plus a few more when taking into account Sunday rehearsals the fortnight before opening. Not long, is it. It will all come together – it always does – but it does make me feel a bit sick if I think about it for too long. So I don’t think about it. I busy myself trying to be useful – making notes, answering questions, being available for edits or to talk about scenes or characters.

Oh, and bringing in rehearsal props …

The Studio Upstairs is a small venue, seating about 80. The brief for the plays was something without a set. And I can confidently say I have no set. Instead I have props. Lots of props. The action in Rains takes place in an attic room, described by one character as a ‘junk yard’ … basically, everything this family don’t want is dumped up there – from camping equipment to Christmas decorations. And a lot of it is utilised during the play. Props are a pain. Fact. Or more to the point, props are a pain in the early rehearsals when an actor is trying to hold the script in one hand, read it, act, remember where to be and deal with aforementioned prop at the right time and in the right way. Assistant Director Bev has been a star on the rehearsal props front already – there is an ever-growing pile in the rehearsal room, atop it a note reading ‘Do Not Touch’ in formidable black marker pen. I have provided the duck. He is doing pretty well with his lines and is good at finding his light. He may turn out to be a diva, but time will tell.

Me and duck won’t be back along to rehearsals until next week now, cos this Thursday and Friday I’ll be hangin’ (get me, down with the kids) with them there Boys on the Edge. Do you see that seamless link … do you? Clint makes its debut, along with Laura Lindow’s Mine and Bridget Deane’s I Am Legend, at Live this week – both performances now sold-out which is fantastic. I’ve been along to a few rehearsals the last couple of weeks, Rosie Kellagher is directing and David Tute stars. It’s been interesting seeing Clyde come to life – he’s not a straightforward boy in not a straightforward play.

I’ll let you know how it goes … xx