Gawd, some people (read: me) are just never happy.

One minute I am moaning on about Dolly Would’s rather tortured journey into being [read the post here] … but now the script is finished and recorded, I find myself missing it – moping around, not sure what to do with the Dolly-shaped hole in my schedule.

What would Dolly do? Probably not try to fill the hole with cake. But heck, I like cake!

I’ve been prepared for this eventuality, mind you. The play has been part of my life for such a long time, to now not have it will take a little getting used to. We recorded at BBC Broadcasting House last week. 18 hours to record 45 minutes worth of drama might sound like a lot, but in the grand scheme of things it was nothing. Five years since I had the original glimmer of the idea; working on the radio commission since January – when I look back at my 2011 Wall Chart (yes I have a Wall Chart, what of it) it is peppered with pink highlighter pen signalling the various Dolly deadlines throughout the year. 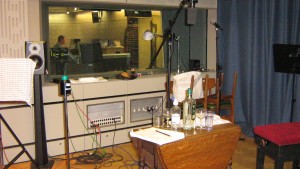 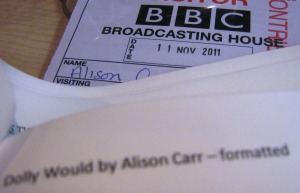 There were times when I thought the damned thing would never end, when I could quite happily have thrown my Dolly CDs out the window and never wanted to hear 9 to 5 ever ever again. But I didn’t throw anything out of any windows, and in fact yesterday when I was in a shop and they started playing Dolly’s Together You & I, I found myself singing and jigging along before remembering I was out in public!

When all is said and done, I worked bloomin’ blinkin’ hard and was able to hand in a script I was proud of and had (overall!) enjoyed writing. That’s not to say I think it’s perfect, but for my first radio drama – learning a new medium on the job – I feel hopeful that I have delivered something entertaining and true to my ‘voice’ as a writer.

The two days recording were quite an eye-opener. Director James assembled a great cast, led by Sharon Percy as Denize, Lee Ross as Martin and Libby Davison as Joanne. 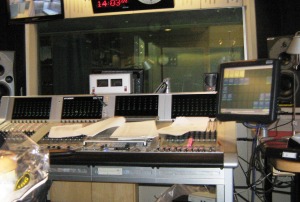 There’s no time for messing around – rehearsal time is virtually non-existent, it’s straight in and the clock is ticking. Cuts and rewrites are quick and after a handful of takes per scene, that’s it. It’s recorded, it’s committed. It was a steep learning curve, but I left definitely wanting to write more radio drama. (Let’s hope radio drama feels the same way!)

The play is being edited over the next couple of weeks, with a confirmed broadcast date of Wednesday 4 January. And so we’re back to never being happy because on the one hand, I cannot wait. Christmas has turned into an inconvenience, something getting in the way of the big day! On the other, though, I am trying not to wish the weeks away. Not least because it’s Christmas and I like this time of year, but also because once it’s broadcast, that really is it. 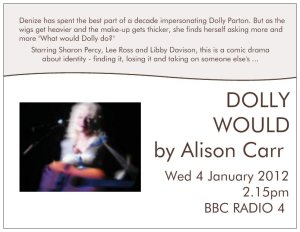 One thought on “What would Dolly do?”