Hello! I’ve been a bit quiet lately, haven’t I.

So, since my last:

I was rehearsing for, and performing in, Bombshells at The People’s Theatre. A collection of monologues by Australian playwright Joanna Murray-Smith. I got to work with a lovely and talented team and sport ‘librarian chic’.

I went to New York. I know, right, get me, swish swoo.

A Wondrous Place opened in Liverpool before heading to Sheffield. It’s had some great audience reaction and reviews so far, including  ★★★★  from  The Guardian. It pitches up in Newcastle on Tuesday. More info and to book [here]

I applied to, and have been shortlisted for, Northern Stage’s Title Pending Award – which is very thrilling. The judging weekend is imminent, gonna dig out my loose rehearsal slacks and soft jazz pumps.

I wrote draft #3 of Vera Shrimp, ready for our development week at Northern Stage last week. Now, when we left Vera things were all a bit gloomy. Rosie and I had just finished our week at ARC Stockton and I was really struggling.

Well, fortunately, last week things took a turn for the better. I made a concerted effort to shake off what had gone before and come into it with a fresh and positive attitude, not be my own worst enemy and harshest critic. (Rosie will confirm that it’s an ongoing effort, but I tried!) 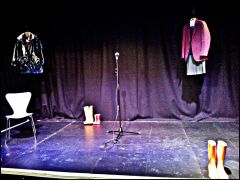 We powered straight in to getting the show on its feet and the words in to my mouth, and made a huge amount of progress. We started thinking about its shape and its tone, finding the voices of the other characters and my voice as narrator. We welcomed award-winning designer Imogen Cloet to the fold, and starting to think about the visual elements was very exciting.

The week culminated in a showback on Friday afternoon during which I performed a 30 minute extract from the play. It’s amazing what you can achieve in four days, and I am really proud of what we were able to show of our work-in-progress. I won’t lie, I was nervous. My performance wasn’t perfect but, you know, that’s ok. I got out there and I did it, which feels like a real personal victory. We were able to give a flavour of some early design ideas, Northern Stage’s Kev and Mareike provided us with lighting and sound to support and create atmosphere and mood … all in all, we have a show. Or the beginnings of one. And it, and I, can only get better.

So, we’re looking ahead now to the previews in July at Live Theatre and ARC. They’re work-in-progress preview performances but of the whole show – so those who were asking about how it starts, and how it turns out, come along and find out!

Big thank you to Northern Stage for hosting us and for their support. Equally big thank you to those who came along to see it – your encouragement, comments and questions are hugely appreciated … x